Hi I'm Sean Reiser, this is my Personal Blog 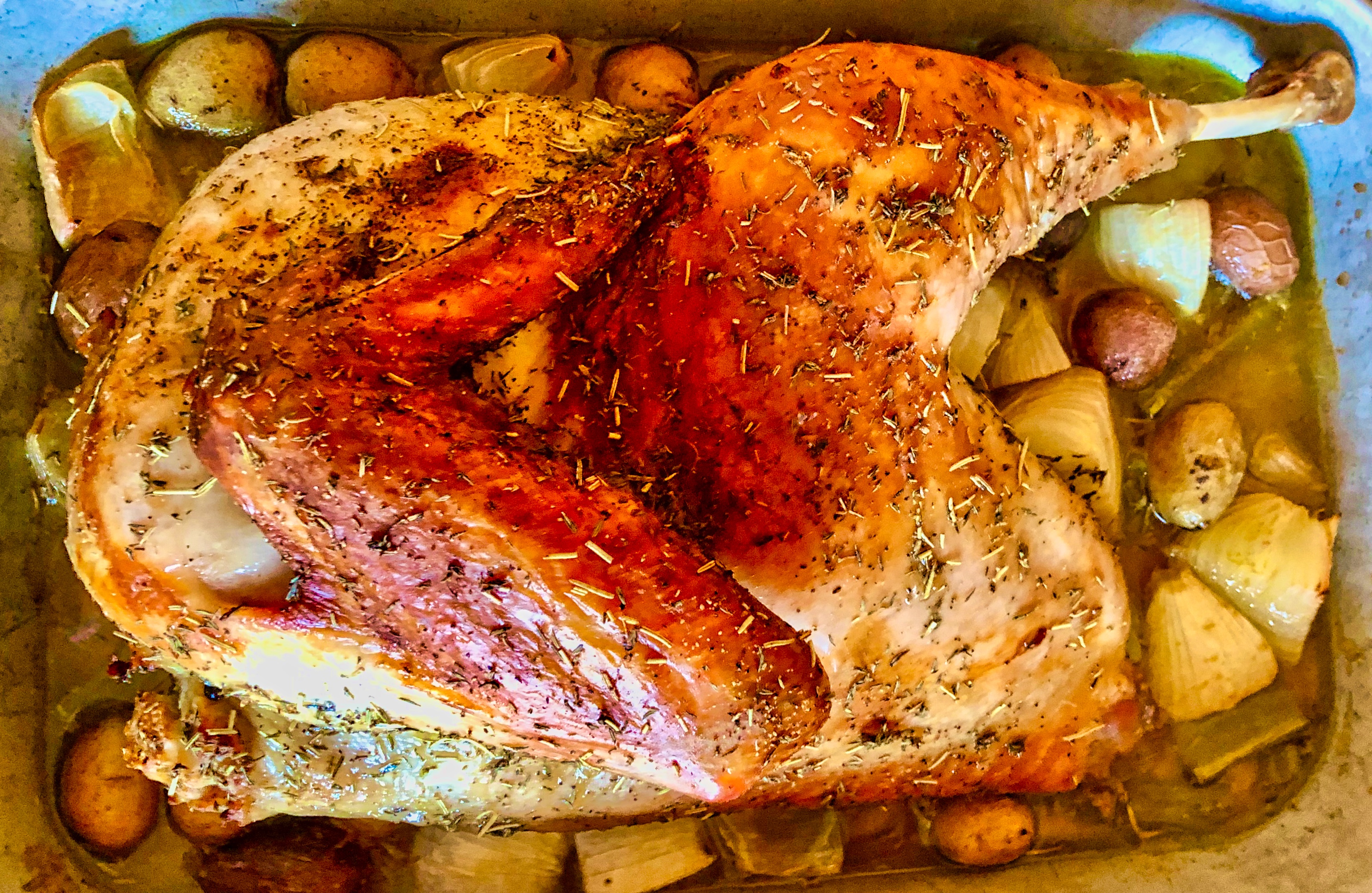 Because of CoVID, I had to make a Thanksgiving Turkey for the first time in my life.  Since we were a small group, I didn’t want to make a full turkey and eat on it for weeks.  I was a little intimated by the notion of making a turkey between basting, the potential of the bird drying out due to the long cook time, and the risks of an undercooked turkey, it was something that always concerned me. Many people would make a Turkey breast, but Anne and I enjoy both dark meat and white meat.  We were looking at getting turkey pieces and roast them when we saw a 1/2 turkey at the butcher and figured it might the perfect compromise.

I tried to convince Anne to let me deep fry the turkey.  I was picturing slowly lowering the bird into the hot grease while neighbors and friends chant, "Gobbler! Gobbler! Gobbler!" like my beloved bleacher creatures would chant for The Yankees.   Anne quashed the idea, something about a risk of fire and hurting myself.

I also though about smoking the turkey out on the grill. Something I'll probably do in the spring when it's a little warmer outside since it takes a while to smoke a turkey then roasting it.  So  I decided to roast it.

In doing my research I found Cowboy Kent Rollin's Smoked Turkey recipe.  Although I wasn't smoking the bird, the brine looked like it would make a flavorful piece of meat.  So I used a variation of it.  I set it up the night before.

The turkey came out moist and flavorful.  The skin was crispy.  Since roasting time is only around 2 hours, it doesn't dry out and doesn't need to be basted,  It was a great meal. 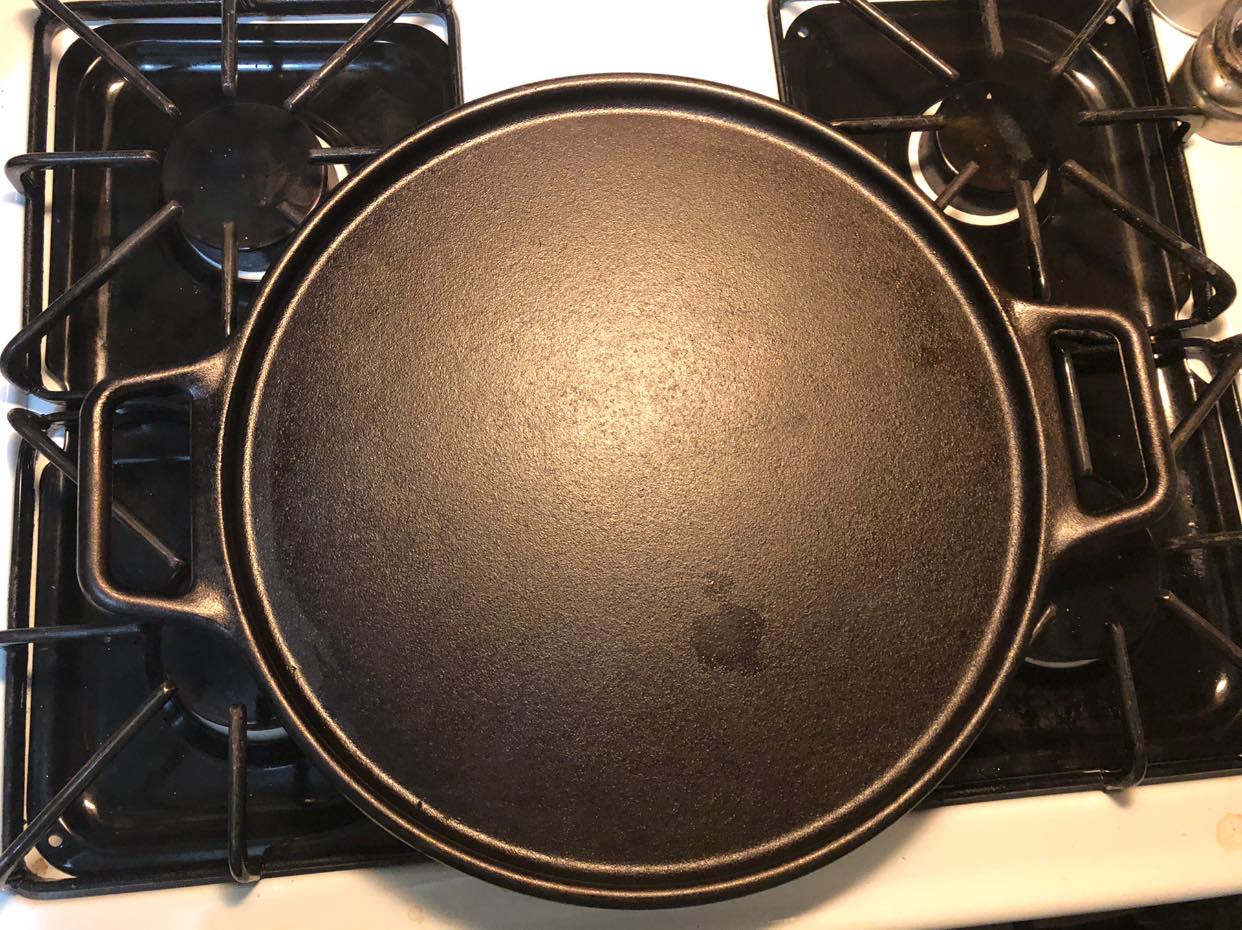 Please excuse the blatant advertisement for my services, but I've always lacked subtlety. Professionally, I build, support and maintain Drupal Websites. If you need help with an existing website or are looking to build something new, click and learn about what I do. I appreciate your support.

Making a Pie (or a Pan Dowdy) on an Outdoor Grill 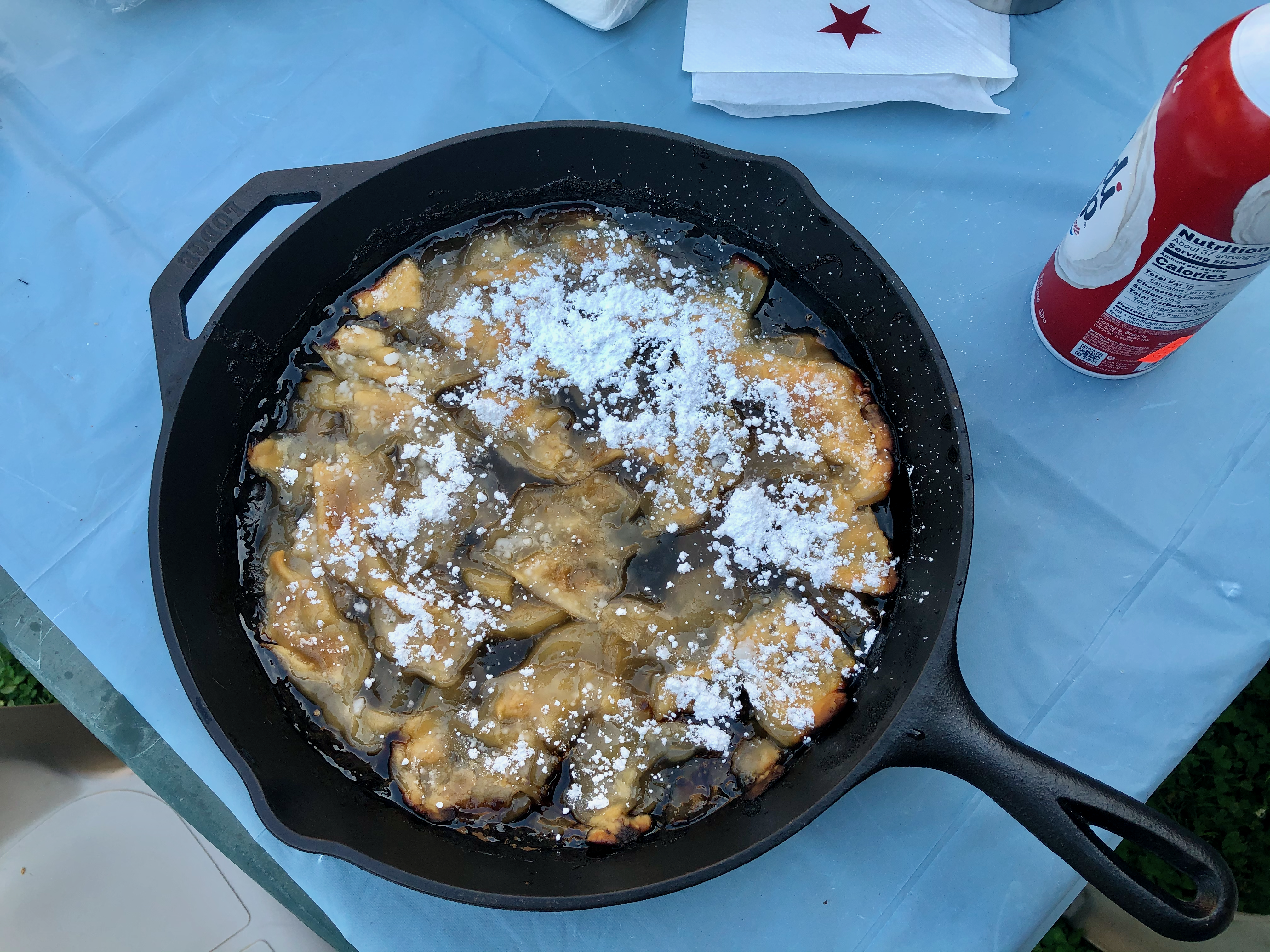 At the apartment building where we live, Anne and I have a number of friends who get together once a month over the summer, throw some meats on the grill and hang out.  I tend to play grillmaster.  Someone brings burgers, someone else brings some dogs.  Joyce brings a tray of ribs which are always excellent.  I spend the time at the grill cooking things (or heating things up).   Salads are brought.  As is beer.  A good time is had by all.  Now I’ll be honest, I enjoy cooking, but making burgers, dogs and the like really isn’t a challenge so sometimes I like to make something that’s different.

This past weekend we had one of our gatherings (now with Social Distancing) and the night before I had a hankering for an apple pie.  I know it’s not apple pie season but I was in a mood.  So I decided I was going to make one on the grill.  I know that might sound odd to some folks, but one thing I learned is that if you cover your grill and control your temperature, your grill becomes an oven.   I know that on my grill. If I keep 2 of the 4 burners on medium and avoid any grease flare ups, once it gets to temperature, my grill maintains 375 degree heat.

I have to be honest, bakers will be offended how I did this, it’s store bought pie crust and canned pie filling.  But that this article is more about thinking of different ways to use your grill, not the actually recipe.  Use your best  pie filling recipe if you like.  Spend hours making your best scratch puff pastry.

I just decided to be lazier still and do a pan dowdy.  Instead pf a nice uniform crust, pieces of the puff pastry are mixed in.  There’s no reason your can’t cut and a proper crust to the pie, but this is a BBQ, not Thanksgiving dinner.  People are slopping themselves up and eating charred meat with their hands, no need to get fancy.

Although not the fanciest dessert, I felt like it was enjoyed, here is the after photo. 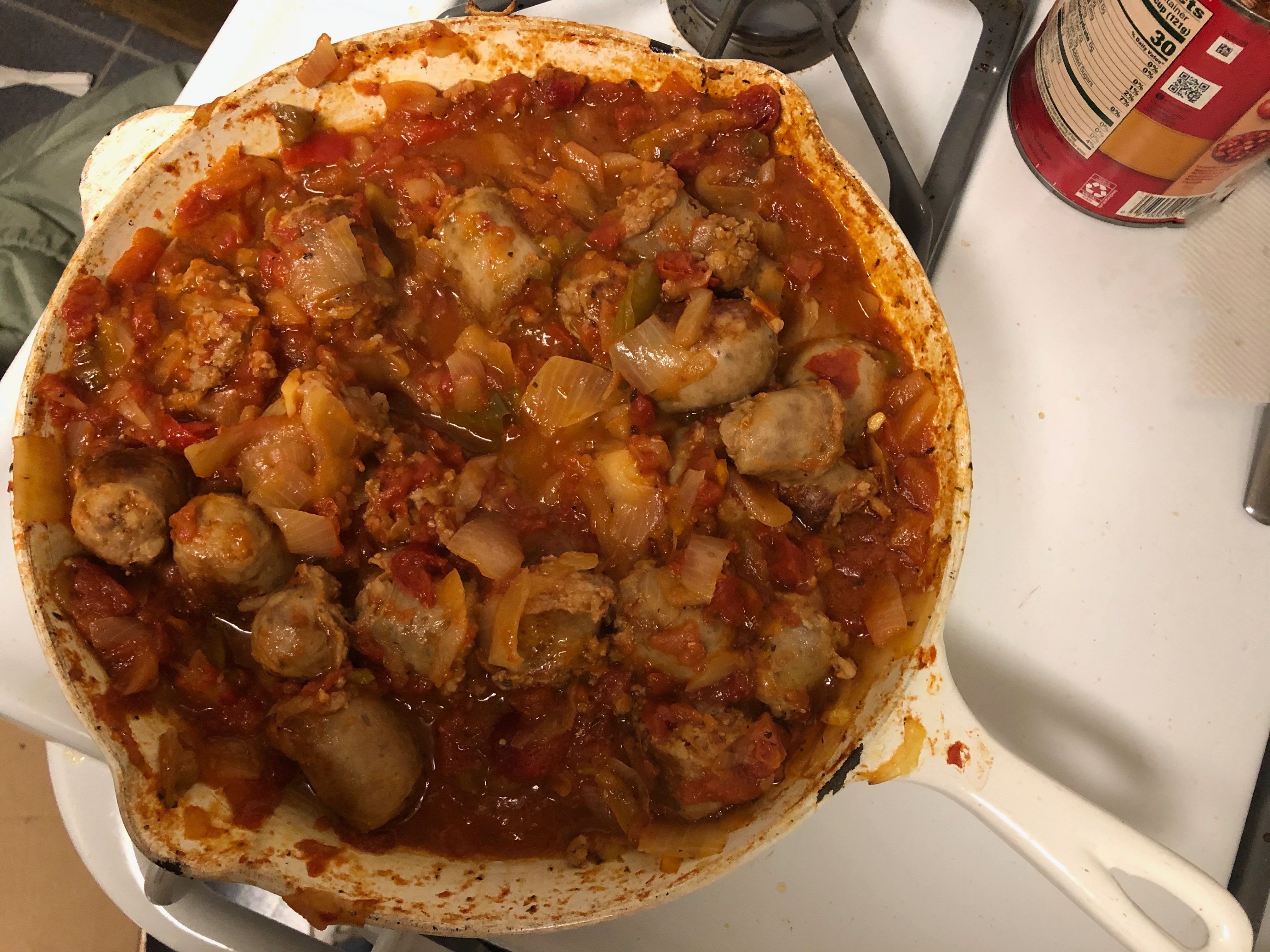 I do this for Anne and myself often.  I have to admit to using some shortcuts (pre-prepped veggies).  But it’s a dish were I get to cooking quickly and have a good meal with minimal effort.  We often eat it by itself or over pasta. 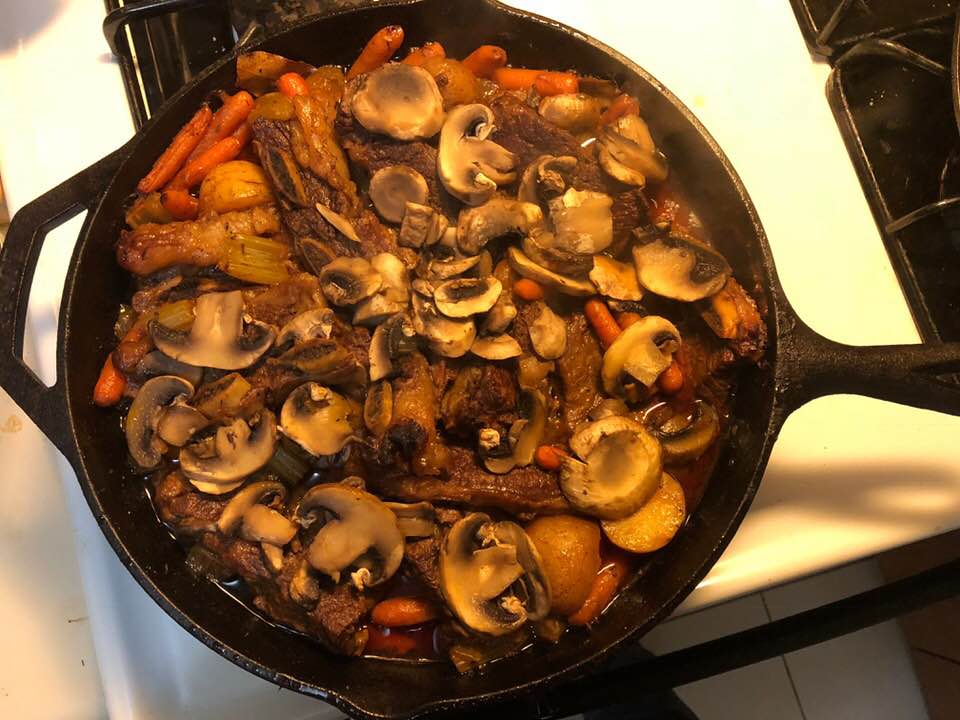 Over the last year or so, Anne's been taking care of family problems so I've been cooking less and hence, posting fewer recipes.

At a socially distanced Memorial Day bbq today someone brought short ribs.  We got to talking other ways of prepare short ribs and I mentioned this recipe.  I was going to send it out to the group and realized I never blogged it.  So, although it's almost summer and not oven at 325 for 3 hours season, I thought I'd post it.  Share and enjoy! 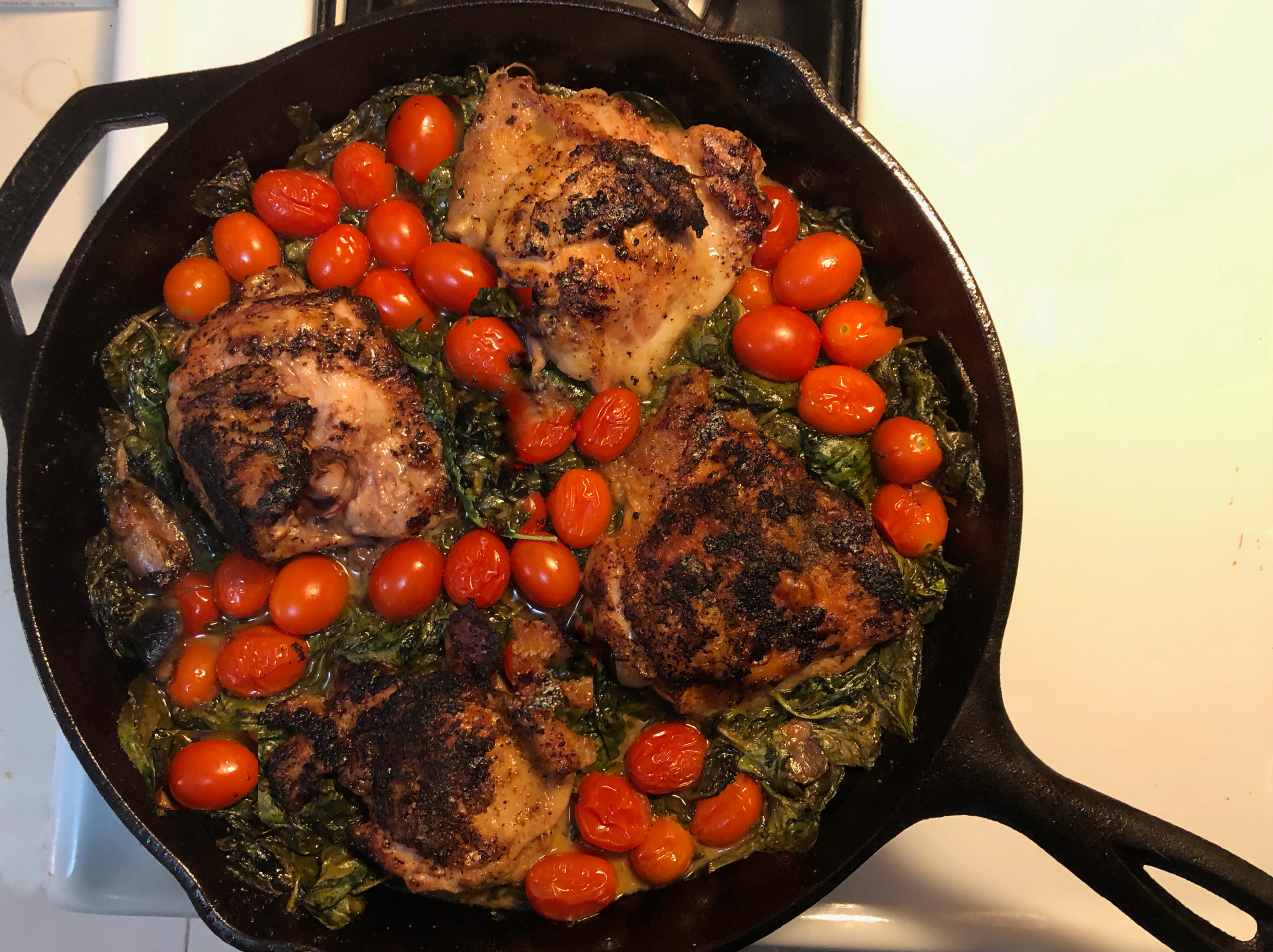 Nothing better than apples and any pork product.  Here's a quick and simple dish I made last night and served with green beans and rice.

Brussel Sprouts with Bacon in a Creamy Cheese Sauce 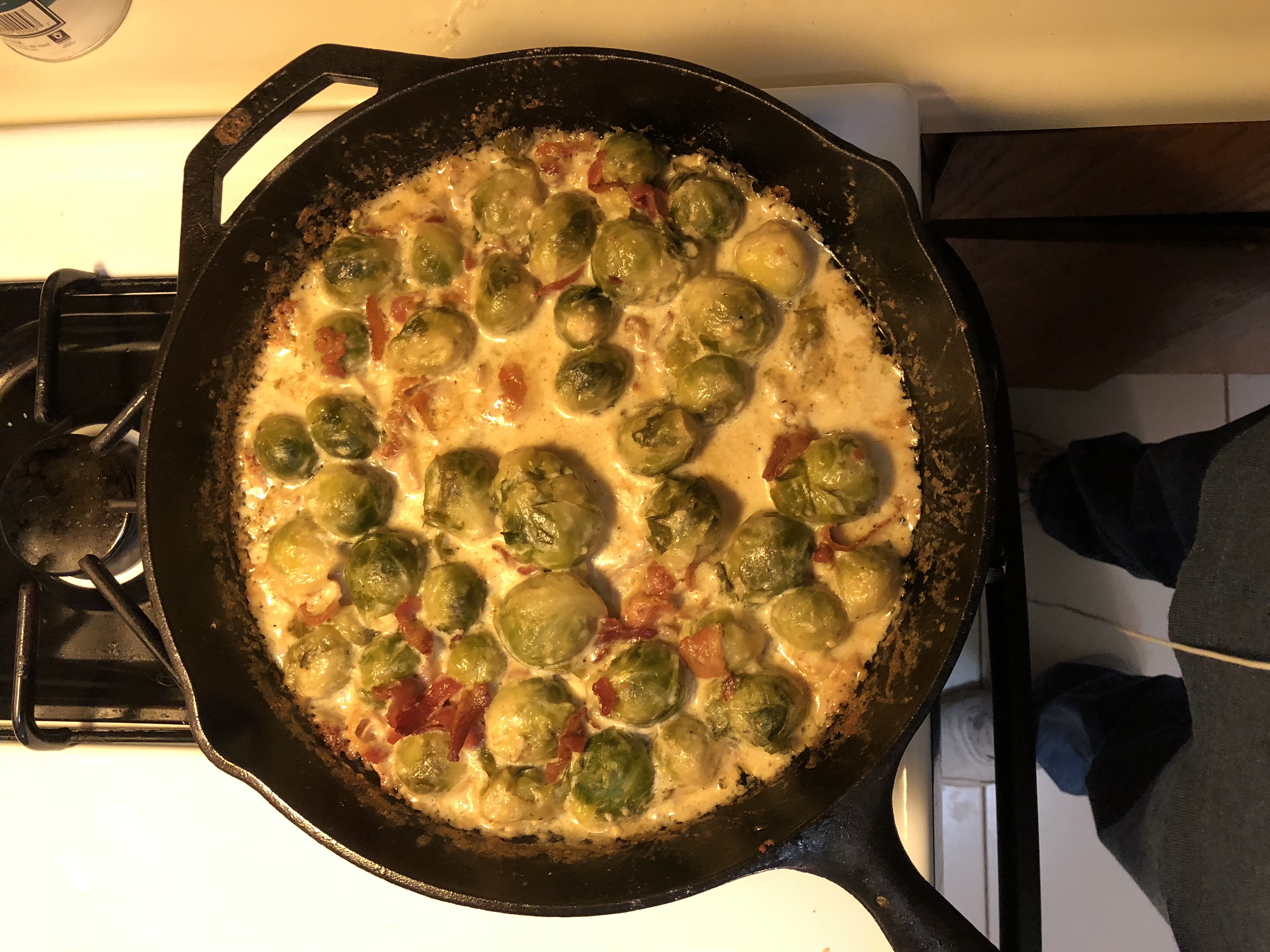 I'm not a person who generally cares for Brussel Sprouts.  This was yummy (although I did bribe myself with cream and bacon fat).  Real discussion with my better half:

Me: "You want me to eat brussel sprouts, right? 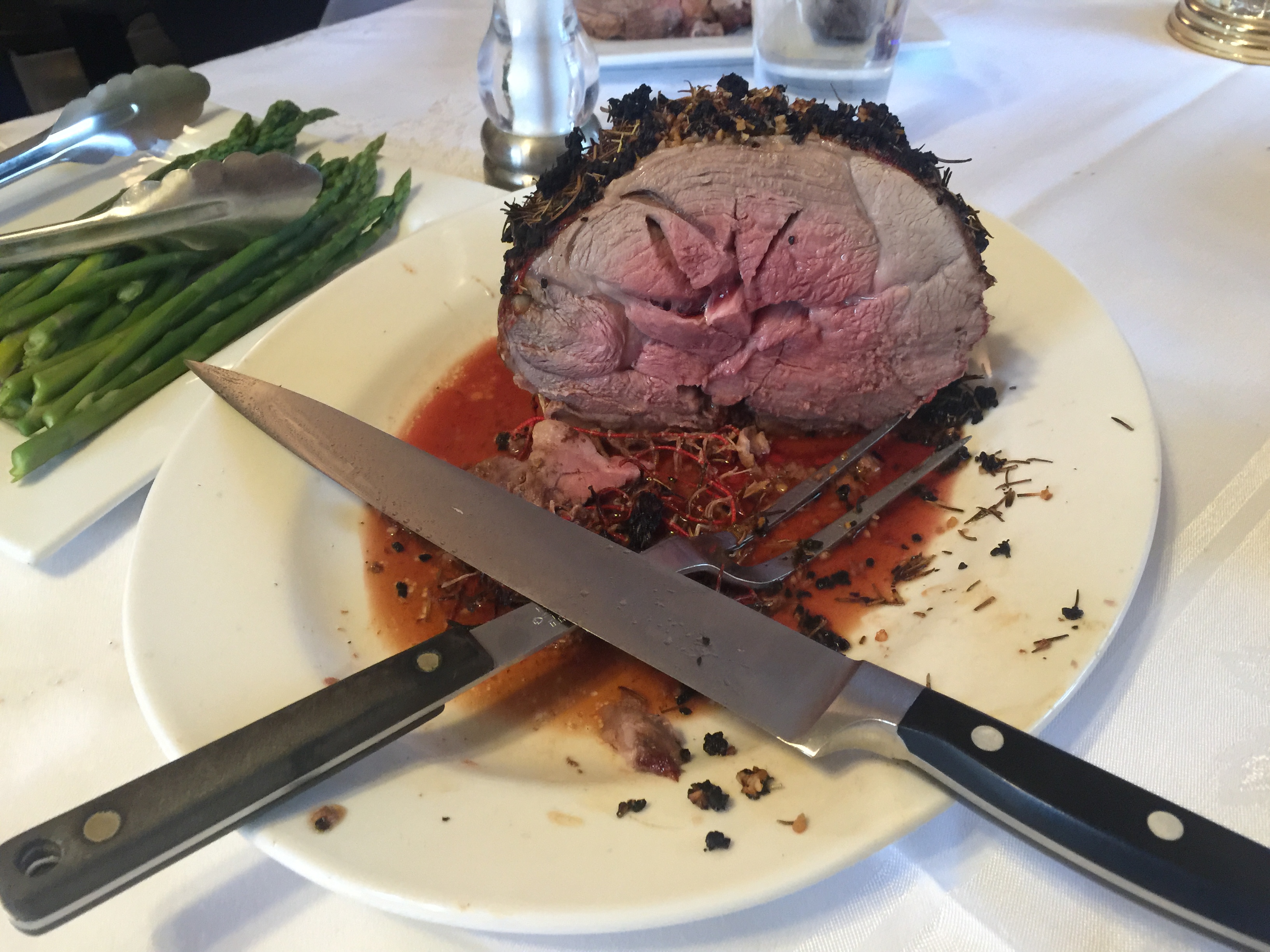 Made a Leg of Lamb for Easter 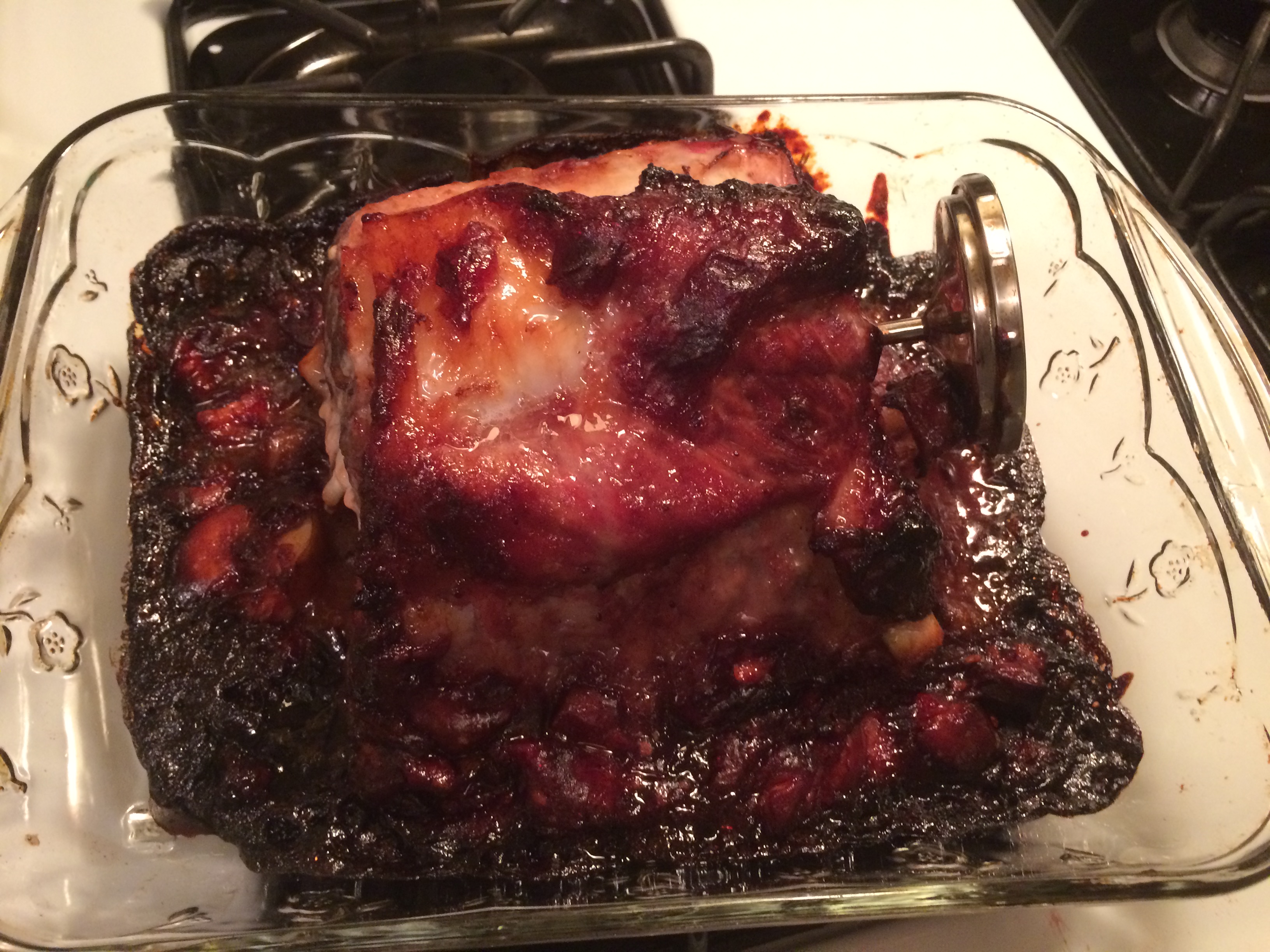 In a small saucepan, combine cornstarch, apples, cinnamon, and salt. Stir in orange juice and cranberry sauce. Cook over medium heat, stirring, until thickened, and set aside.

Place pork in a shallow roasting pan and cover with about half the cranberry mixture. Insert a meat thermometer. Roast 1 to 1 1/2 hours, basting occasionally with the remaining sauce. Meat is done when thermometer reads 160 degrees F. Remove meat from oven and allow to rest 10 minutes before carving.

The opinions expressed in this blog are mine and not those of my employers, clients, friends, or family.  If you agree with everything I say you should seek professional help.

Made on a with
and   in the big
using