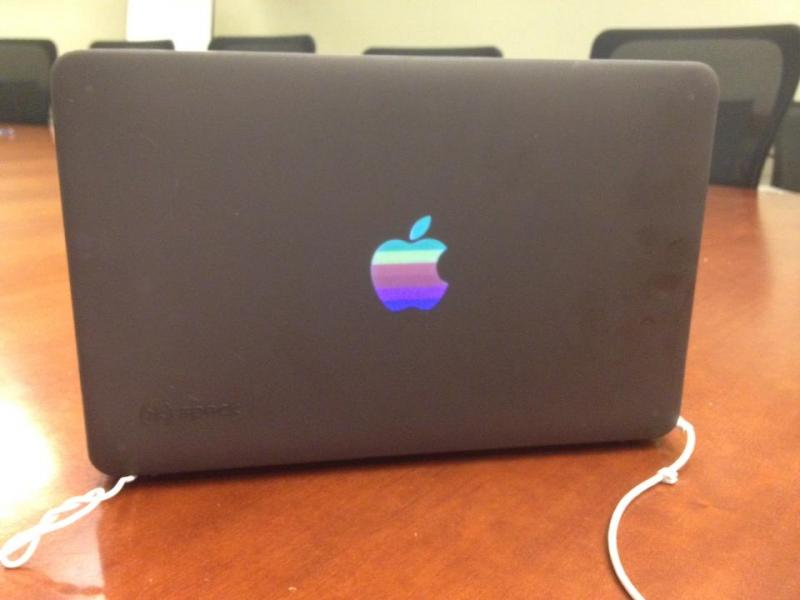 For a long while I’d put a translucent apple rainbow sticker over the glowing apple cutout my on MacBooks Pro. Most people would ignore it, some people understood, a surprising number of people thought it was a statement on gay rights. It was just nostalgia for me. Dating back to my first computer in ’84, my Apples had a rainbow logo.

While I was working with a non-profit I was presenting a new design for their logo and website, presenting from my laptop. This non-profit is one of those places that Sr Democratic operatives work when the Rs are in power. Participants in the meeting included a former Attorney General, a former Assistant Sec of Defense (who would rejoin the Obama Administration as Secretary), someone who would become President Obama’s Chief of Staff and the guy who wrote the 9/11 Commission Report (all very serious people, who I think could have me killed with one phone call). The meeting went off well, and with some minor modifications, they used the designs I presented

Well, after the meeting the comms director gives me a tongue lashing. About how important people don’t want frivolous things around. She became a dog with a bone, so eventually I removed it just to stop the argument. Now a days The Apple doesn’t glow any more. so the rainbow logo isn’t as fun on my machine.